Team ERITREA: The RED SEA Boyz are back!


In 1996 the Eritrean soccer federation officially was founded even though Eritrea had been playing in games against other nations since 1992. Like everything else in Eritrea the development of a world popular sport once hailed as Eritrea's national past time seems to have seen its ups and downs over the past 24 years. While the long tradition of the game dating back since the early part of the 1900's has seen some incredible results like the 1962 African nations cup where 9 Eritrean players helped Ethiopia win the cup of nations, this article will focus more on the recent history of the team.

As we speak Eritrea ranks at 202 in the FIFA rankings where every activity you are involved in as a team is considered when being ranked. Because Eritrea has not played a game at the national team level for almost 2 years, its ranking has been very low where countries like South Sudan, Palestine and even Syria and others are above Eritrea in the ranking orders. 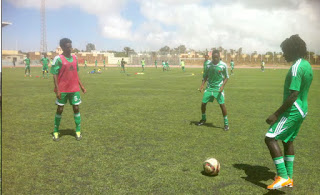 Hold your horses? Is that disappointing? No, not at all. As a matter of fact the positive thing that will come out of this weekend's game between Eritrea and Botswana is that Eritrea is the under dog playing against the 111 team in the world. Its chances of winning is high as Eritrea's home record has always been pretty good. Meanwhile add to that the addition of some international players including probably one of the top soccer players to ever be associated with Eritrea, the one and only Henok Goitom.

Eri-International sports has been covering Eritrea related soccer news including the national team, as well as players of Eritrean origin and more for a long time now. It is truly a great moment for the blogger no matter what the outcome is to see the national team back again. It was a suggestion that was written in December of 2012 after the last defection of Team Eritrea players. On the blog I wrote,

" Meanwhile I do hope that just like the cycling and running programs in Eritrea, the national soccer team will get better. Why not allow a couple of our Eritrean international stars play for the national team alongside players from the smaller rural towns and cities who will take the sport a lot more seriously, therefore making it difficult for the city slickers and the spoiled young men of Asmara to make the team. Just a suggestion!"

While I may have been harsh about the city slickers & spoiled young men, out of frustration as a fan, I am so proud to see the ENFF (Eritrean National Football Federation) bring to fruation an idea that most of us in the diaspora have been talking about. Thank god we have enough players now for many more years and just like cycling and running this sport that requires more unity seems to be headed in the right direction.

We don't need to say much about Henok Goitom as everyone knows what he is capable of. For some of you here in the USA who may not have known his Swedish Team AIK had come to the USA a year and half ago to play the Portland Timbers of the MLS in a pre-season game where Henok was able to score for his team in a 1-1 tie from an incredible angle. Here are the highlights and you can see Henok's incredible goal at the 45 second mark.

Meanwhile Gol Gol Meberhatu we are being told is in Eritrea and will be missing his first league game of the season with his new team the Western Sydney Wanderers where he scored a dynamic goal a few weeks ago to lead his team in the Australian FFA cup after coming back from an injury.
Here is a link to his story where the game took place in August. The actual season of the A-League starts this weekend.

According to reliable sources the team seems to have every position filled with talented players. Coach Alemseged Ephrem who was a member of the the 1994 squad along with the previous coach Negash Teklit and others seems to know what he is doing. He has had regional and international experience and we should all be proud that he is a home grown coach who came from within the national team system.

Some of the players he is banking on with the exception of the foreign based players from Europe, Australia and Saudi Arabia are Mussie Negasi and Fitsum Hailemichael (nicknamed Baggio for former Italian star Roberto Baggio). Sudan based Samyioma Alexander and Robel Kidane should also bring with them a wealth of experience. The midfield, the left and right full back are solid and the offense is just amazing and packed from both local and international selections. We hope our middle defense will sort itself out. Add to that the 12th person (FANS) expected to be there in big numbers, Botswana will not have anything on ERITREA. Also from Asmara we are being told that Botswana team had closed door sessions where they did not allow any media to attend. according to some sources

By the way despite all the negative stories we heard about the national team in recent years it was just in August 2007 that ERITREA had it's highest FIFA ranking ever at number 121 which is not too shabby considering the country was only 16 years old at the time. Eritrea has had some success in the past and that will never be taken away from the RED SEA Boyz as the tradition continues.

Good luck to the Red Sea boyz against The Zebra's of Botswana. Based on some research we have done Botswana should not be a huge threat but recently have seen some success against Burkina Faso in a 1-0 victory in early September but only to lose to Ethiopia 3-2 in a friendly game two weeks ago. Their international players consist of players playing in South Africa's league and they have one player playing in the newly created INDIA yes INDIA super league where big money is being spent to lure good players in an effort to help build soccer in India. 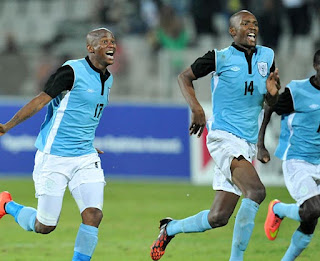 Just a couple of pointers for those of you who will follow the game. So far we don't have any concrete evidence that the game is being transmitted live. Please don't pay attention to some of the soccer score websites who claim the game is on Live. Unless ERI-TV announces it officially we don't know. They have in the past transmitted it and we hope they can get it done again. If not even on a delay basis we can wait to see a GREAT WIN! Meanwhile Dimitsi Hafash will have the game live on radio so TUNE in to the great DIMTSI HAFASH to follow the game if not on ERI-TV. We also expect to see our great Journalists Amanuel Alazar and Kibrom from Eri-TV sports to keep us posted.

Good luck to our boys and hoping that soccer will be back strong in ERITREA!