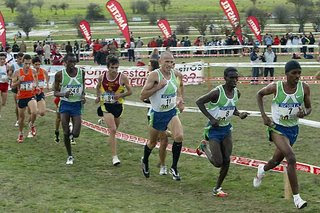 (Picture)Ali Abdallah leading the pac in Spain. Eritrean Athletes have found the knack in Europe as Zeresenai Tadesse also trains in Spain and Eritrean-Swede Henok Goitom continues to shine for Real Murcia in the Spanish First division.

Hello Eritrean and all sports fans,
It has been a while since this blog was active last. As the wind of Hizbawi Mekete's blow in every Eritrean corner throughout the globe the "Sportawi Mekete" continues to also be alive and well. As the season change approaches and the holiday season comes to a near Eri-International sports blog would like to update you on the latest happenings in the Eritrean sports world. Starting off with Cycling The Eritrean National Cycling Team has scored impressive performance in the 22-km. chronometer race of the African Championship that took place in Cameroon in mid November. Eritrean cyclists Bereket Yemane, Frekalsi Debesai and Daniel Teklehaimanot stood 3rd, 4th and 5th respectively in the race. More than136 cyclists from 17 countries took part and the well established professional South Africans took first and second place respectively. This is a great result for the up and coming Eritrean national Cycling federation.

Let's take our attention to soccer or sometimes known as football, the Eritrean national soccer team was a disappointment in the African nations cup qualifying even though they finished second in their group behind world cup contenders and group leaders Angola. Eritrea could have advanced as a second place team had they beaten Swaziland at home and away instead of ending in a draw. What is ahead now for the men's national team? We will explain however before we jump into the men's events, the Eritrean national Women's soccer team will take on Tanzania in the African Women Championships starting the weekend of November 30th, 2007 and then the second leg in Tanzania a week later. The women's team last played against a strong Moroccan team. They lost in Rabat by the score of 2-1 even though they were able to come from behind and defeat Morocco in Asmara by the score of 3-2. Also in the past the women lost a very close game to the Tanzanians. They have a great chance to redeem themselves.


Now to the The Red Sea boys. The Eritrean squad will participate in the CECAFA Kagme Cup taking place in Tanzania starting on December 8th 2007. Eritrea is grouped in group B where they will face Rwanda on December 9th, 2007. The rest of their schedule looks like this where they face strong teams. Eritrea is in Group B and it's schedule is as follows.

09/12/2007 Djibouti - Uganda
09/12/2007 Eritrea - Rwanda
11/12/2007 Djibouti - Eritrea
11/12/2007 Rwanda - Uganda
13/12/2007 Djibouti - Rwanda
14/12/2007 Eritrea - Uganda
Meanwhile the draws for the 2010 world cup to be held in South Africa have finally been decided and Eritrea faces another world cup contender from 2006 Togo while also taking on African super power Zambia and a team that prevented them from making it to the Nations cup Swaziland. There are 12 groups and of course South Africa will get an automatic bid. Then The 12 group winners and the eight best runners-up will contest the next stage in the qualification process. Eritrea needs to use this opportunity to shine and with the Youth team advancing to their first ever African nations cup last year, the adult team should be able to utilize the talent pool while also attracting other Eritrean players playing professionally elsewhere.
Running,
In Soria, Spain – Eritrea’s Ali Abdallah was a convincing winner in the ‘13th Cross Internacional de Soria’ - EAA permit - held in mid November at the ‘Monte Valonsadero’ circuit on a windy but generally nice day of weather. Abdallah is another one of those up and rising stars in Eritrea's short but incredible history of running where the likes of Zeresenai have made tremendous achievements in such a short time.
I don't know why it has not been shown all over Eritrean websites but running's best magazine did a feature story with 7 pages on Eritrean running. Titled "The Sun Rises on the Horn of Africa Led by Zersenay and The Major, Eritrean Runners' day has come." The magazine and the writer follow Eritrean runners starting from Zeresnai while they also speak about the Eritrean nation and it's athletic success in a very positive light instead of all the junky stories being written in other magazines to demoralize the Eritrean people. Here below is the link to the 7 page article and the magazine can also be purchased from stands all over the world.
http://runningtimes.com/rt/articles/?id=12144

Every Eritrean should be proud of Zeresenai and the rest of the running, Cycling and soccer mens/women and every other sports athletes representing Eritrea. After all they are representing and participating in a "Sportawi Mekete" side by side with their people throughout the globe and in Eritrea. Eri-International sports blog will try to have more stories as they become available and will try to keep you update with the scores of all the up coming games.
Until then this is Mike Seium for Eri-International sports.
http://eri-internationalsports.blogspot.com
So Long and victory to all Eritrean athletes and teams.
Posted by Unknown at 2:14:00 PM

Hello. This post is likeable, and your blog is very interesting, congratulations :-). I will add in my blogroll =). If possible gives a last there on my blog, it is about the Aluguel de Computadores, I hope you enjoy. The address is http://aluguel-de-computadores.blogspot.com. A hug.