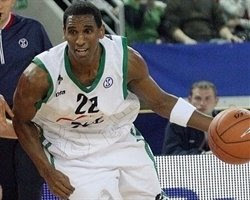 If PGE Turow Zgorzelec the best proffesional basketball team in Poland can be called the most pleasant surprise of the ULEB (Union League of European Basketball) Cup season, a main reason for its success is another surprise, Thomas Kelati, the only elite pro player who carries the passport of the African nation of Eritrea. Kelati was born in the United States shortly after his parents escaped war in Eritrea.

Following a successful university career, Kelati debuted as a pro in Europe two seasons ago, helping Dexia Mons-Hainaut take the Belgian Cup in 2006. Kelati's very next stop was Zgorzelec, and his impact last season was immediate. He led Turow to reach its first-ever Polish League final while being given plenty credit for the turnaround as the team's best scorer and top defender. In the ULEB Cup this season, Kelati has done nothing but prove his quality again, ranking second on the team in scoring while leading one of the competition's top defenses to a place few thought Turow could reach, the Final Eight. Already the pride of basketball fans in one entire country, Kelati attempted to help lift Poland to its highest step on the European stage onThursday, March 20, 2008 but came up short as his team lost to a strong Russian Side.

Kelati finished his wondeful season for Turow in ULEB CUP as Dynamo Moscow overcame Polish Turow Zgorzelec and did not allow them to advance to the next round. The Russian squad took control from the early beginning and won the game by the score of 78-63. Henry Domercant led the winners with 22 points. Milos Vujanic nailed 16 points, while Robertas Javtokas scored 15.

Even though David Logan was the top-scorer for Turow with 19 points, Thomas Kelati netted 15 and showed that he can still contribute against tough opponents. Henry Domercant not only was the top-scorer for the winners, but he also set up a new ULEB Cup elimination rounds record for more shots from downtown three point range without a miss. He nailed six out of six three-pointers. Vujanic capped a 7-0 Dynamo run but Thomas Kelati answered with a long jumper to keep Turow in the game. Robertas Javtokas helped Dynamo to stay ahead 25-17 in the opening quarter. It was again Thomas Kelati who tied the score at 25-25 as his team Turow enjoyed a 10-0 run for a 27-25 advantage. Vujanic drove a last minute layup to help Dynamo's halftime advantage at 43-38. The Third quarter became the decisive in the game as Dynamo started to increase their numbers. Robertas Javtokas spurted Dynamo's run by14 points and with the score 59-45 Thomas Kelati tried to ignite a Turow comeback but Kelati and Turow fell short as they lost the game by the score of 78-63 in what was a spectacular season for the Polish side.
Mike Seium
Eri-International sports
Posted by Unknown at 4:39:00 PM 3 comments: Links to this post