A personal outlook: Before, during and after ESPN's documentary "Redemption Song"

On June 7th, 2016 ESPN's new venture "The Undefeated" will feature a short documentary about a story that was collecting dust for many years. This is a story of defiance and challenge and one that this blogger had been following for many years. I was one of the lucky people to see the premier this past April 2016 along with members of the 1974 Howard Team, coaches friends and family at Howard's campus.

What triggered my interest?

It started out in the late 1980's when I was attending undergraduate school in South Carolina at Francis Marion University where I also played soccer. Other than soccer and some social events with team mates I spent quite a lot of time at the library where my interest in reading historical magazines lead me to start taking away the famous "Soccer America" magazines from the library with permission as a second copy was always accidentally delivered to our prestigious campus library. And when there was no second copy, members of our soccer team would know where to find it as my apartment was scattered with these magazines.

One day the librarian asked me if I wanted to help throw away some boxes with books and magazine as they were cleaning up the school library to make room for newer books. I glanced through some of these magazines and saw older versions of "Soccer America" as far back as the 60's. I respectfully asked if I could have them and the librarian replied if "you get to them before the trucks come you can take them away". Once I got a hold of these magazines, I spent quite a lot of time looking at the history of college and professional soccer in the USA and the connections it had to the international soccer arena. It was while reading these articles that I came upon the story of "Howard University's
1971-74 soccer team along with the many other college soccer stories that motivated me to practice and play hard while in college and to continue to tell these stories as a motivation for others. I found out that there were many East Africans, West Africans, Caribbeans, Latin Americans and other immigrants from Europe & Asia that have contributed so much to the game here in the USA. I was even proud to find out that there were a few Eritreans that helped in the growth including a player on the Howard University historic team.

First and foremost they are a historically black university that competed in NCAA division 1 soccer and during the civil rights era it was difficult to compete against schools that had a far more bigger budget to build their soccer programs. Howard was able to bring together players from different parts of the world and unite them as a collective group for a mission. The NCAA wrongfully stripped them of their 1971 undefeated season after winning the national championship and three years later the Bison came back and did the unthinkable. They did not lose a single game or tie any games in their quest for a championship. They did what no other team has been able to do until now. Their stadium was always packed to capacity at every home game as they entertained their followers. The wins were always convincing until the dramatic, quadruple-overtime national championship game that took place in a cold St Louis Busch stadium.

The coach of that historic team and my current colleague at the NSCAA Black soccer coaches association was once a star goalkeeper for the Trinidad & Tobago team that played against my ultimate hero Pele in the NASL (North American Soccer League) a league that I used to love watching as a kid. This team will forever go down in history as one of the most exciting and mentally strong teams. Their story is the American story of hard work and dedication and should inspire all of humanity. They faced many obstacles and they continued to concentrate on their mission which was to get that championship back. They took it back after it was taken from them. Every young person today should use this story as way to inspire themselves. It should also be noted that most members of the team have gone on to become very successful people in their lives.

My Thesis at George Mason University.

As a former college soccer player at Francis Marion University nicknamed Patriots, I have some great memories of playing soccer and to this day I continue to be engaged with the school through our alumni network of friends and the soccer team. The program has improved so much over the years. When I decided to get my masters at another school nicknamed Patriots (George Mason University) I also learned that the school had produced the first African-American female soccer player to play for the United States women's national team. Little did I know that I will be doing my thesis and at the same time as my submission ESPN would be doing a documentary on this historical achievement. The good thing is I am able to submit it at a later date after adding new information that would help understand how a very unfair and unjust decision in 1971 was able to recreate another NCAA national champions without a loss of a single game. This historic occasion should be discussed as a topic today and must be used to educate people to be more tolerant and understanding of other cultures. As a former TV broadcast journalist I had intended to do a documentary myself as this story had all the ingredients of a documentary film but the producer for ESPN along with Spike Lee were able to get to the story before I did and I am glad. I want to give them kudos as they did an outstanding job. The great part about it is the producer Mark Wright was a soccer player who played for Ian Bain a star of the Howard 1974 team. The connection is deep and the story was very intimate.

If stories like this are buried chances are the new generation will not understand the struggles that people had to go through to get to where we are at today. It is also imperative to understand that the issue of racism will always be around unless minority communities speak up and share their achievements and success stories to the world. It should not be a taboo to talk about a human interest story that is inspirational, rather it should be a proud moment. I was encouraged by my advisors at George Mason to pursue this story because it is a story of defiance, unity in diversity as players from different backgrounds including African-Americans at a historically black institution were able to come together to help destroy a disease that we all know as RACISM! through the beautiful game we know as soccer.

The Eritrean connection in Sweden is spreading its wings. Thanks to Henok Goitom and many other Eritreans in Sweden soccer player with Eritrean heritage are starting to see some very much needed success. The latest star that we have been talking about is 16 year old Alexander Isaac who has been performing so well for the first AIK team, meanwhile defending champion of the Swedish Premier league IFK Norrkoping happens to have an Eritrean teenage standout by the name of Tesfalidet Tekie known by his nickname "Tess" who is also 18 years young. Tess was born in Eritrea and left for Sweden at a very young age. He has been playing very well and has impressed the coaches of the under 21 national team for Sweden.The 18-year-old midfielder was called up to the Under-21 national team's European Championship qualifier against Georgia on Friday June 4th, 2016. He got the call following IFK Norrköping game against Elfsborg where he played some excellent soccer at midfield in a 0-0 tie.

For those of you who may not know the IFK Norrkoping team, IFK Norrköping are currently the defending champions after winning the 2015 Allsvenskan, which also gave them a spot in the second qualification round of 2016–17 UEFA Champions League. So we can look for Tesfalidet during UEFA champions league games. 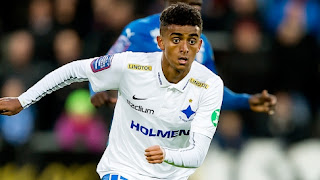 All eyes are on "Tess" as Coach Håkan Ericson seems to think that he will be a future star. The 18 year old Tess has previously played some games for the under 17 and under 19 national teams. It would have been nice to have him and Alex Isak play for Eritrea but because of their very young age and more opportunities they will more than likely play for their adopted home countries. Either way we wish them all the best and congratulations to Tesfalidet Tekie for representing Eritrea and Eritreaness. Good luck!

Eri-International Sports blog was created almost 10 years ago to help educate sports fans about Eritrean athletes around the world and within Eritrea. It also serves as a blog that can help share sports information which can be helpful to media, academics and historians while also educating the younger generation about the great deeds of Eritrean athletes that have done wonders.
While the long term of the Eri-International sports is to help bridge gaps and share valuable information, it has also developed and forged relations with different organizations. 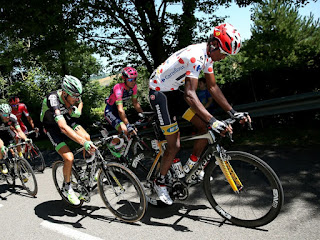 I would like to now share a very nice story on how Eritrean cycling has had an impact on many people. The fact that Daniel Teklehaimanot won the mountain stage of the "Tour De France" last summer has done wonders for Eritrean cycling. The fact that Merhawi Kudus and Mekseb Debesay participated in the UCI world championships in Richmond, VA has also made thousands of people aware that Eritrea is the champion of Africa and pretty soon a cyclist from Eritrea will win a big event. Last week thanks to some young Eritreans and proud members of the community at large, I was contacted by a person from the "Mountains of Misery" Cycling challenge. After a lengthy conversation and an exchange of respect and ideas for each other, the event wanted to reach out to us Eritreans that are cycling fans. 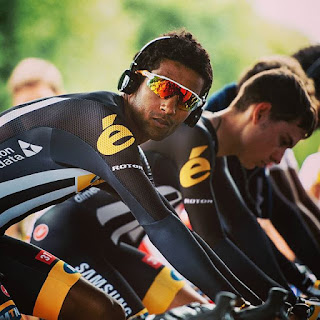 It is also to be recalled that Eritrean mountain bike riders have always done well and may be in the long term an Eritrean rider can participate in the "Mountains of Misery" challenge pretty soon.

So What is the "Mountains of Misery Challenge"? For more information check out their website: http://www.mountainsofmisery.com/

Mountains of Misery is a challenging bike ride for dedicated road cyclists through the heart of southwest Virginia. The annual timed event features century (100+ mi) and double-metric century (200 km/124+ mi) options—both ending in a tough, four-mile 12%–16% graded climb to the finish.
This is a very challenging course and any one who likes the challenge can also participate. Eri-International Sports is especially thankful to Mike Lashinsky for reaching out to the Eritrean community. He participated in this year's challenge and asked us to join him as a sponsor. He seems highly inspired by the Eritrean national cycling team, culture and fans. While this may not be your average cycling race it is a great way to advance the sport of cycling and put ERITREA on the map as well. We hope to have an interview with Mike very soon and will post it. Thank you for reaching out to Eri-International sports blog and allowing our blog to get some attention on your website.