Cycle away Eritrea: Olympics here we come Like it or not.

I guess the term "Nkhid Tray" or "Segum" is applying in sports these days and Eritrea is starting to make some serious noise be it running, cycling, or soccer. While runners continue to run and make their mark internationally, the Cycling team has also proven to be the best in Africa. What an honor and what a moment for the nation of Eritrea. It was just in 1996 when two Eritrean Cyclists came to the U.S.A to be exact in the city of Atlanta when they were denied participation at the 1996 Olympics. The two who got an overwhelming support from Eritreans in the diaspora along with a humanitarian Japanese group known as Peace Boat did not get a chance to participate. Yohannes Zekarias and Bereket Zere watched on the sidelines despite all the efforts to get them to participate only four years after an independent Eritrea was formed. Their moment of pride was shattered as the IOC denied them entry to participate after they flew to Atlanta all the way from Eritrea.

Well! Oh how times have changed. Today two Eritrean cyclists have qualified for the 2012 Olympics in London and more may come as we near the next Olympics almost 15 years later since Atlanta 1996. Daniel Teklehaimanot and Meron Russom have already bought their ticket after an astonshing performance at the African Continental Cycling championships held in Rwanda. The Eritrean national team has also shown that it is capable of working as a team as they won the team trial session easily placing First. In the elite race Eritrea placed four cyclists in the top ten and 7 in the top twenty with Frekalsi Debessai finishing a strong 19th. Frekalsi one of the top notch cyclists continues to play a big role in the development of Eritrean cycling despite his results which is not too bad at all. 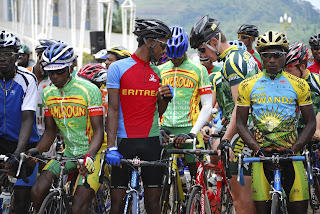 What makes Daniel's situation even sweeter is the fact that he is a professional athlete in Europe and he made his way back to represent Eritrea in the African continental championship. He is an inspiration to other athletes and we hope to see an Eritrean Gold in the 2012 Olympics in London.
Congratulations to Eritrean athletics as the term "Nkhid tray" & "Segum" are proving to be a success model just like everything else happening in this nation of the can do people.

Here below are results of the top 20 from the African Cycling Competition in the Elite men's course,
Top twenty Elite (Eritrean cyclists highlighted) 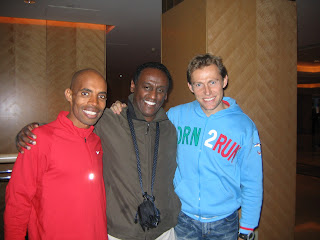 The blogger with 2004 Marathon Gold & Silver Medalists Meb and Italian Stefano Baldini
During the press conference when many media outlets were covering the post marathon reactions the organizers brought in the athletes turn by turn and Legendary runner Haile Gebreslassie announced he was retiring at which point everyone was quite and shocked since it was not expected, but Haile vowed that it was time to hang it up and pass on the baton to the younger generation. Then Meb came in as a defending champion even though he finished a very respectable 6th, place. Meb was even surprised at the fact that Haile would announce his retirement but in a show of respect and admiration for Haile, Meb was very saddened and surprised and spoke of how he had influenced him as a runner. Meb is a class act and what Haile did for his country and running Meb was emulating for his two countries of Eritrea and the United States.With the thought in mind what if Eritrean Zeresenay Tadesse came to New York City and how would he fare? I proceeded to ask Meb a question which I wanted a reaction to. I also calculated the fact that the winner of the NYC marathon Gebre Gebremariam made his debut in the marathon race for the first time. Just like the many other potential Eritrean runners this guy comes from cross country and it was his first marathon ever. My question to Meb was as follows,
Q. Just like you mentioned Haile was your inspiration like he is for many other people, you're an inspiration to many runners, including half marathon world champion in Zersenay Tadesse. And Gebre Gebremariam, this was his first marathon, and he was a half marathon runner. So do you think chances are very good for people like Zersenay Tadesse to come and run in these types of races?
MEB KEFLEZIGHI: Thanks for the nice comments. I always try to be the best that I can as a human being. If you do the right things, things will fall in places. I know Zersenay Tadesse hasn't hit the home run on the marathon, but he's definitely done five times the world champion, and 58:38 I think is the world record. So his day will come. And Gebremariam, he just I remember on First Avenue he was like, come on, let's go. Because he asked me for advice right when we laid down in the tent, what do we need to do? I said, be patient on First Avenue. I remember I was behind, he said, come on, let's go, let's go. I tried to go with him. But he was able to connect with the other guys. It's all about passing the knowledge. Give them good advice, and hopefully like you said I inspire some people. They'll inspire others to do the best they can. It's great to see. The ING New York City Marathon is not an easy thing.
Immediately following that question I was getting bombarded by some of the press members and other folks that came and introduced themselves and proceeded to ask who I was talking about and how do you spell his name? I said Zersenay Tadesse and he can be currently found in the top two of the IAAF athlete of the year voting if you go to the IAAF website. Lo and behold the next day I saw on the website that Zeresenay Tadesse along with 4 other athletes were chosen to be in the competition for IAAF athlete of the year. Zeresenay, thanks to all the votes from those that know he is a hard working Eritrean hero but also one of the greatest runners of our time, decided to vote for him as the top leader of the IAAF vote. It was a pleasure to explain to some of these folks about Eritrea and most of them were somewhat aware of it thanks to Meb. What made it even sweet for me was after I got home that evening I saw in the news where Teklemariam Medhin along with Kidane Tadesse (Zeresenay’s younger brother), Samuel Tsegai , Kiflom Sium, and Tesfayohannes Mesfin of Eritrea finished in the top ten at ‘Cross Internacional de Atapuerca’ which witnessed the shock defeated of  World Cross Country champion Kenyan Joseph Ebuya as he was beaten by Eritrea’s Teklemariam at the end of the race. The rest of the team finished in 3rd, 5th, 9th, & 10th place giving Eritrea hope to be the next nation in the region to join the long and middle distance running surge that has long been dominated by the Kenyans and Ethiopians. 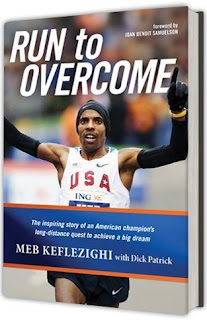 A book that I recommend to everyone who wants to be inspired. The story of an Eritrean-American athlete.


Finally, I would like to say that Meb has been an inspiration to many like Zeresenay after him and the many more to come. I also would like to say that Merhawi and the entire kiflezghi family have left a long legacy for humanity through their support of Meb. His wife and beautiful daughters are also a pleasure to be around. It does truly take a village to raise a family and my hope by writing this blog is to inspire other Eritrean and non-Eritreans to work hard in whatever they do in life. I recommend Meb’s book highly. It is informative, educational and can relate to many other Eritrean-American families stories in some fashion. Congratulations to Meb on his foundation the "MEB Foundation" which according to him will continue to educate, support and create healthy families. Donations from the book will be given to the foundations work.
The writer of the blog currently serves at the EAAA information desk officer.
For Eri-International sports blog
Mike Seium
Posted by Unknown at 12:07:00 PM 1 comment: Links to this post