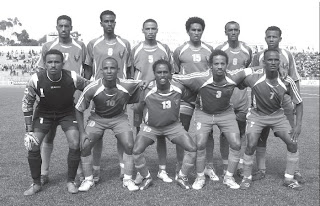 The Eritrean National team, the Red Sea Camels will take on the Kenyan Harambee Stars in Asmara this weekend. Eritrea beat Kenya in Nairobi by the score of 2-1 even though the ref in that game gave Kenya a penalty kick at the end of the game which they missed. As a result the Eritrean head Coach Mr. Dorian Marin was suspended for protesting the terrible call. Mr. Marin who will coach his last game for Eritrea because of his contract must be commended highly for turning Eritrea's program around.
For those who don't know Mr.Dorian Marin, who is he? and where did he come from? Well Mr. Marin was born in Romania, home of one of the best soccer teams in the world in the 1990s with big stars such as George Hagi who by the way can go down in history as the most exciting player to come out of Romania. Mr Marin was a student at a soccer school known as Bakoz in Romania and he went on to play professionally in Romania and Italy between the ages of 17 & 34 years. Mr. Marin then went on to coach in places like Syria and Lebanon where he was able to help teams achieve success.
The Eritrean team must win this weekend and that will take the Red Sea Boys a step closer to making history just like the under 17 team did in Togo. Ghana is the venue for the 2008 African nations cup. Meanwhile Kenya will come into Asmara prepared as they plan to over take
a second place in the division. They defeated a strong Rwanda team that made it to the nations cup in 2006 by the score of 2-0. Eritrea can't miss opportunities like it did against Angola a couple of weeks ago and also the Redsea Boys must not under estimate their opponents.
Advantage for Eritrea is the fact that they are playing at home and they have always played well against Kenya. A clear indication that the Eritrean national team is doing well is that in just 16 years of existence as a nation the national team has reached it's highest ranking ever in FIFA.
Kenya comes in as an underdog for the first time ranked below the Eritreans by one point.
This will be a historical day and a memorable day for Eritrea as Coach Marin will be present for his last game. The Eritrean national team has also called up two youth national team members to replace two players that were suspended with cards. Goal scorer against Angola Elias Ali and Tesfalidet Goitom both got two yellow cards each. Dahlak Tecleab who was a star player for the Eritrean under 17 side will replace Elias Ali while Professional player Elias Debesai will replace Tesfalidet. Meanwhile Kenya's biggest star Dennis Olisheh will not play as a result of an injury during the harambee stars 0-0 tie against Swaziland. Swaziland will face Angola in the other divisional game.

Good luck to the Red Sea boys! & Congratulations for improving in your rankings.
Posted by Unknown at 4:59:00 PM

Thank you once more for your terrific blog. I was born in diaspora so I have a big challenge trying to figure out information haddas eritra is publishing. Hopeful I will have more use of your blog and your insightful remarks in the future. If you have any idea of how the get of hold of video from the national team football games I would be very thankful if you could share that knowledge. Thank you please post more hehe god bless Mike from Sirak in sweden

Thanks Mike for your amazing effort to connect us with our homeland. There are a lot of Eritrean football fans in the diaspora. But there is a big information problem. Please keep up the good job. Hope we will get videos and other information in the future. Thanks again.

Dorian Marin was born in Bacau, not Bakoz - there's no such place in Romania.

Dear, edgar! don't forget me in this connection, i am also a big fan of Eritrean football..

check a good one..

Hey Mike....first and foremost...you're doing a great job trying to connect us with football development in Eritrea.....but discrepancy of some details of facts is visible....
for instance....in the Eritrea Vs Angola match held in asmara which finished 1-1, the scorer for the Red sea boys was the #7, Hamiday who at the time was playing for his team Red Sea in Asmara. He scored in the first half with a glancing header after rushing from the far post to the near post in a lightening speed.