Subversive campaign by anti-Eritrea sectors: The defection of members of the Eritrean national soccer team in Botswana.


Before we get upset and before we try to analyze and re-analyze why some players on the ERITREA national team that traveled to Botswana decided to remain and ask for political asylum, let us take a deep breath and not get caught up with the enemy tactics to DEFAME ERITREA! through sports for purely a political reason. Let us look at the facts. Eritrea was back to FIFA international play for the first time in almost 4 years. Ranked at number 202 as a result of past defections, in a two week span of time utilizing Eritrean players from overseas the team competed well.

Meanwhile, cycling & running victories and accolades have spiraled the sports fever in Eritrea in recent weeks. There is no doubt that Eritrean athletics is on a HIGH now. While many good things were happening and we also witnessed one of the biggest crowds ever at Asmara stadium last weekend, somebody had to spoil the party.

Enter a group known as ERITREAN MOVEMENT FOR DEMOCRACY & HUMAN RIGHTS (EMDHR) who have been waiting to capitalize on a situation similar to this. What made it even better for them was the fact that this game was right in their backyard not too far away from South Africa where they are based out of Pretoria. While 24 members of the 34 delegation returned back some who make their homes outside of Eritrea, the 10 players urged by the network of
organizations have decided to remain in Botswana.

According to a prominent lawyer from Botswana who usually engages in litigation's against Govt. officials by the name of Dick Bayford, "I have been engaged by the movement to assist in keeping the football players in the country after they received reports that there was an attempt to forcibly remove the players from Botswana," The so called opposition Human rights organization created in South Africa and wanting change in Eritrea seem to think that because 10 players defected the country is in uproar and we have serious problems. However they don't know Eritrea. What makes it even worse is that the lies such lawyers who claim to be human rights lawyers say to make money. He will get his share from the criminals.

Bayford's audacity to claim that the EMDHR was worried that the players, who are said to be part of the Eritrean army, are likely to be charged with desertion if they are sent back to Eritrea, which is punishable by death. Pure fabrication but strong evidence for Mr. Lawyer!

Defections are not new. Even as recent as this past summer members of the Cuban national soccer team had defected to the USA during the Gold Cup Tournament. Only difference is that these athletes know automatically they will be granted asylum as the USA allows Cuban athletes to defect because the so-called “wet foot, dry foot” US policy is still in effect. The rule stipulates that a Cuban who sets foot on US soil is allowed to stay.

As you can see on the picture below the nucleus of the team is still there along with many other players. To those that defected the sad part of it is that you are using the Eritrean national team to send a political agenda that allows failed organizations like the EMDHR to gain propaganda points. 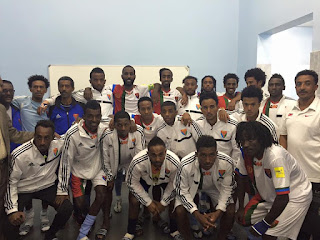 Meanwhile I am of the belief that players from all parts of the country should be chosen for the national team. The top teams in Eritrea's premier league had a nucleus of the local players on this team but the ENFF must do everything it can to choose players who care about representing their FLAG! Just like Henok and the other players playing outside of ERITREA the passion for the game and the responsibility to represent ERITREA should always be there.

Posted by https://eri-internationalsports.blogspot.com/ at 1:49:00 PM