Thomas Kelati continues to be a well seasoned and a steady player as he gets older. As most of our readers know he got his start in professional basketball in Belgium then Poland and he moved on to Spain and Russia afterwards. In between he was able to rub shoulders and actually get along with one of the world’s best basketball players of our time Kobe Bryant. He currently plays for Polish side Stelmet Zielona Góra where he has been contributing to the team’s second place success. His team’s chances of playing in the European Champions League are also high this season. He made the move to Poland where his wife is from after spending most of his career playing for top Spanish teams. 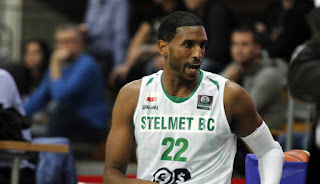 Thomas with his current team in Poland Stelmet Zielona Góra

This article will focus on Thomas and the Lakers and why he did not pursue the opportunity to join a topnotch team. With Alexander Isak rejecting Real Madrid and a couple of other big teams, may be some athletes can learn from these Eritrean family values and well cultured athletes that may change the way decisions are made in the future. There are still some questions that linger as to why Thomas did not continue with the Los Angeles Lakers to this day. 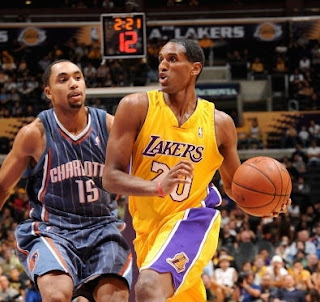 Thomas with the Los Angeles Lakers against the Charlotte Bobcats during his short stay.

It was the year 2009 and fans all over the world were following the former Washington State Cougar and all Pac 10 standout as he made his way to the city of Angeles where he had an opportunity to play for one of the best professional basketball teams in history. As a free agent, Kelati signed with the Lakers in a training camp invitee role on September 30, 2009, but he was later waived or was he really waived. During a recent interview he conducted with a Polish Journalist Thomas was asked about the contract with the Los Angeles Lakers. According to his responses, which were conducted in Polish, the experience for Thomas was great as he was about to fulfill the dream of playing in the NBA.

The Lakers invited him to camp along with seven other players. During this period of time they approached him through third parties and finally decided to call his agent and mentioned to him that Kobe really likes his style of play so did Phil Jackson. The Lakers thought that Kelati fit into the team’s plan and wanted to keep him, however within that year alone the Lakers had to cut a staff of 13 players as a result of high salaries and luxury tax. The team promised Kelati that they would send him to the D-League and would call on him during the regular season, at which point Thomas decided that he would be better off playing in Europe, thus rejecting the Los Angeles Lakers offer.

Why would anyone turn down a great team?

Thomas had options and he decided to go with his instinct to play in Europe and make guaranteed money instead of lingering in the D-League of the NBA where he would have had to wait on the Lakers to call him up. So once again a year later, the Lakers came calling again, and asked for Thomas with a new proposal but he refused once again because the offer was based on the same criteria as the year before, which was for him to attend training camp and a possible contract at a later time. Meanwhile, during that time Kelati had three great offers on the table from the likes of Olympiacos of Greece, Real Madrid of Spain and Russia’s Khimki, which was offering him a very rewarding contract. So in the end Thomas decided on a two-year contract with Russia’s Khimiki, which also participated in the European championships. He made a clever choice not to put everything into one basket as he fought for a possible contract with Los Angeles without rejecting any of the other proposals. 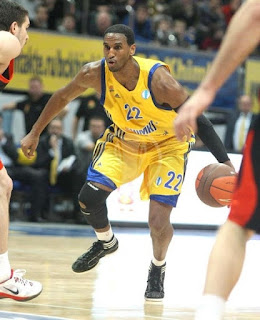 Thomas with Russian Champion Khimiki where he signed a big contract to reject the Lakers.
How was Kelati’s experience with Kobe and the Lakers?

Kelati spoke highly of Kobe Bryant. He spoke of how Kobe was a workaholic and trained intensely throughout the time that he saw him while with the Lakers. Training with the L.A meant measuring up to Kobe Bryant work habits as he set the standard bar high. Thomas also looked up to players like Shannon Brown who was on the Laker’s squad at the time. It was a great experience for him, because he had the opportunity to compete and practice with a legendary NBA player and one of the best players in the history of the game. He added that, “Kobe came to practice early and twice a day.” He was very well liked by his teammates and it was an honor to have spent even a short amount of time with him.

Update on Thomas these days:

After playing with Murcia in Spain last year where he took a pay cut to help the team out he also was getting proposals offers from other teams including in Spain and Turkey where he did not want to take his entire family
(Wife and kids). He finally settled for Poland where his wife is from. He joined Stelmet Zielona Góra as they showed that they really cared about him besides being the current Polish Champions and the opportunity to participate in the Euro Championships. Thomas kelati has come a long way from his college days and continues to inspire young people while showing his character as a family man, professional basketball player, Eritrean-American-Polish. See the youtube video link below for a buzzer beater by Thomas for his new team.

Eri-International sports Blog will keep you posted on his season with the Polish Champions.