Gol Gol Mebrahtu moves from the land down under to the Czech Republic.

Eritrean-Australian Gol Gol Mebrahtu who has been very unlucky with injuries in Australia has made a move to Eastern Europe where he has signed a two year contract with FK Mladá Boleslav which will be vying for the Czech Cup in the Czech First League. Golgol who is now 25 years of age still has plenty of soccer left in him. Already in his first match last week for his new team Boleslav against another strong team in the Czech league known as Trencin, he scored two goals while he missed many more opportunities. Two days later based on his performance he agreed and signed a two-year contract with the Mlada Boleslav club effective from July 1st, 2016 until June 30th, 2018. 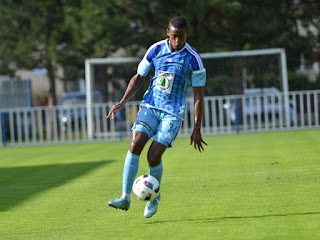 Gol Gol with his new team in the Czech Republic

Recommended highly by former Bayern Munich star and Czech international who played in the 2006 world cup David Jarolim who also happens to be the brother of the coach of his new team Gol Gol will hopefully excel in his new role. His coach was impressed and said that Gol Gol was ferocious, able to hold the ball, willing to work for the team and also takes chances as indicated by his two goals, The team’s coach Karel Jarolím was impressed by the attacker and has shown a big interest in his development for the future. Here are some highlights of his first game.

As most of you know through an exclusive Eri-International sports interview a few years ago, Gol Gol’s career started in Australia in the youth categories where he played for the Northern Districts Brisbane, Brisbane Olympic and Gold Coast United. He then, gradually worked his way up with the A-League Brisbane Strikers (2009), Gold Coast United (2009-12), Melbourne Heart (2012-14) and Western Sydney Wanderers (2014-16). He won the Asian Champions League AFC with his last team the Western Sydney Wanderers. He had also made a debut once with the Under 23 national Australian team, which can technically still allow him to wear the Eritrean national colors. Hope he can contribute to the success of the Red Sea boys barring any injuries. We shall wait and see. Meanwhile, congratulations to Gol Gol for making his way to Europe.
Posted by https://eri-internationalsports.blogspot.com/ at 11:33:00 PM