Eritrean-Swede Alexander Isaac is turning heads once again. The latest big internationally known club that has shown an interest in the 17 year old teenager is La Liga power house Real Madrid. The Spanish giant had scouts observing Alexander at the Boras Arena this weekend as AIK took on Elfsborg in a league matchup. Alexander who was asked by media about the interest from a top team said that he did not have much to say. He remained his humble self as he spoke more about his performance after the game which followed a 2 goal performance last week on his birthday. The game ended in a 2-2 tie and Alexander played well even though he did not score. 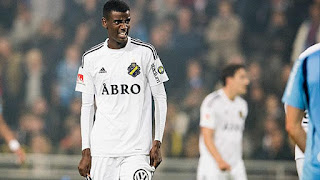 According very credible sources from a Madrid-based media outlet the club has been following the youngster for a couple of weeks. Our Sources from Spanish Media also added that "Real Madrid have been in Sweden for the past few weeks to look at one of the gold nuggets in Swedish football, Alexander Isaac - a young striker who can be compared with Zlatan Ibrahimovic. Madrid's first impression of Alexander has been very positive. Considering the player's versatility in being able to play everywhere on the offense and his knack for passing as well as scoring has made him a desirable player. Alexander Isaac has so far recorded six goals in 13 Allsvenskan starts. It is also to be recalled that teams in Serie A and the Bundesliga as well as the Premier League are after him. Good luck to Alexander as he makes a choice that will enable him to be a superstar

Golgol Mebrahtu leads his team to first place in the Czech Premier League.

In the top league of the Czech republic which is considered one of the better leagues in Europe, Eritrean-Australian Golgol Mebrahtu seems to be having a splendid season as he has helped put his team Mlada Boleslav beat Jablonec 2-1 and helped his club to the head of the league table. 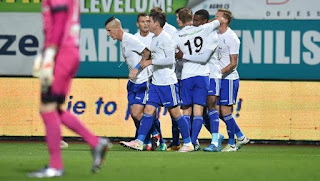 After an early goal by Jablonec which put them ahead, Golgol Mebrahtu found the net in the 9th minute of the match and tied the game. A long ball from Brazilian Douglas da Silva into the goal area was collected very well and the Eritrean-Australian striker scored his fifth goal in the last six matches as he has been hot with his fourth goal in a row. He also missed many close calls. Mlada Boleslav is now in first place surpassing even top tier teams like Sparta Prague which they tied at 2-2. Congratulations to Golgol on a very good season as he seems to have found his niche in the Czech Republic.

Meanwhile in the USA, Eritrean-Swede Henok Goitom still adjusting to his new environment in a very short turn around has performed well even though he has not been playing much. Every time Henok got in the game he has attempted to give San Jose a much needed attack. The California team which has recently sacked its general manager is in danger of not making the playoffs after a 2-1 loss to Sporting Kansas City. They have 5 games left and with a couple of injuries it is looking very tough at the moment. After the starting forward Quincy Amarikwa was hurt, Henok got in the game and a shining moment for Henok Goitom as he displayed his skills with a beautiful assist on the lone goal for San Jose. To use the tigrinia term an Eritrean language Henok "Fetfitu hibuwo" as he made a brilliant pass. Hopefully he will be seeing a lot more action in the coming five games. Meanwhile see link and enjoy the highlight of the game for San Jose despite a 2-1 loss. To see Henok's brilliant pass you can scan to the 1:40 Mark.

Eritrean-American College soccer player Ezana Kahsay selected top player in his conference and made national player of the week.

In another news Eritrean-American standout for the University of Akron Zips one of the best college soccer teams in the nation is having a decent season so far even though his team has lost three games and have dipped down to the bottom of the top 20 in the nation after having been the number 1 team in the nation. Ezana Kahsay whose uncle played for the Eritrean national team and whose father also played in the Eritrean premier league is making some headlines in the college soccer scene. The University of Akron whose program has been top notch since the 1980's also has a great record in academics within its soccer program. Ezana is also a top notch student with a great GPA. This story should encourage every Eritrean youth to work harder and become successful by utilizing your skills to earn a good education. 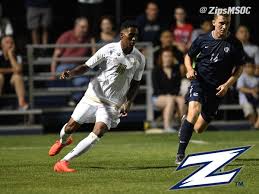 The redshirt sophomore Ezana Kahsay who by the way always puts (Asmeras, Eritrea) next to his name has been named by College Soccer News to its National Team of the Week for the period ending on Sunday, Sept. 18. Kahsay turned in a strong week helping the Zips extend their winning streak to three straight on the strength of team-high marks in goals (2) and point (4). He has also been selected by the Mid-American Conference as the MAC Men's Soccer Athlete of the Week, the league announced on Monday, Sept. 19. The conference award is the first in Kahsay's career and marks the second weekly conference accolade for a Zip in 2016. It is to be recalled last season as a redshirt freshman he helped the Akron Zips to the semifinals of the NCAA championship as Akron lost to eventual champions Stanford University 8-7 in 10 rounds of penalty kicks. The future is bright for young Ezana. Eri-International sports would like to encourage and empower future Eritrean youth to be the best they can be as Academic and sports go hand in hand. Always think that you are a student first and an athlete second. We will have more feature stories and the history of Eritreans in college soccer soon. Stay tuned.