Lots and lots of sports happenings from all corners of the world. Eri-international sports is committed to informing and educating readers about Eritrean Athletes and teams as well as other issues dealing with international and any other sports related stories. First and foremost Eri-International sports would like to wish the entire participants of Beijing 2008 in China as well as hosts of the Beijing Olympics good luck. The Chinese people have been nothing short of splendid and so far seem to be doing an outstanding job of hosting the event. 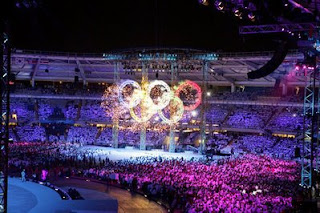 Eritrea's participation at a high level is something that should be commended and I truly believe in my heart that Eritrea will win more than one medal this year.

Gold would be an amazing gift for the hard work and dedication and discipline the Eritrean athletes have shown in the past. http://eri-internationalsports.blogspot.com/

Now in the latest soccer news from Europe.

Henok Goitom will be playing top notch soccer in Spanish first division. Yes! Henok has become Real Valladolid's fourth summer addition after his last team Real Murcia was relegated to second division. Henok will remain in the first division (La Liga) one of the best leagues of the world in soccer. The Eritrean-Swedish striker did not get many chances to prove his skills at Real Murcia last year as he did at Ciudad Murcia during his two seasons on loan with the second division side before he went on to join the priemier league in the same Spanish city of Murcia.Real Murcia were on the lookout for a club they could loan Goitom out to and after a long battle they were able to work out a deal even though they got relagated to the second division of Spain soccer.

With Real Valladolid the 24-year-old will get more games under his belt before returning to Nueva Condomina.Valladolid have also secured a buying clause for the player, with the club's Sporting Director, Roberto Olabe, claiming that it will be positive for the player to enjoy another year of football in Spain's first division. We may see Henok in the British Premier league or playing for a top notch club soon. Eri-International sports will keep you updated. Meanwhile, Congratulations to Henok and his family as we look forward to watching him play in La Liga this year again. 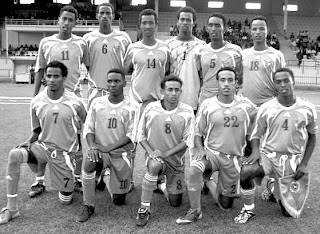 The Newest Eritrean National under 17 team looking good. (Pictured to the right) The young Red Sea boys who made history by going to TOGO last year will be at it again. As they prepare for Congo Republic in the first round of the under 17 African Nations Cup. The youngsters who had made Eritrea proud have even improved a lot this time around as they kept some players from the past and have added new ones. New Egyptian coach ASAID AYMAN along with former national team Eritrean player and current coach Negash Teklit have arranged several exhibition games before the start of the CAF Under 17 which will begin at the end of August 2008. Meanwhile in a recent exhibition game the Eritrean youth team whooped up on the Sudanese under 17 team in Asmara last week by the score of 4-0. Idris Ismael had a hat trick and has been the leading scorer while the many other youth have once again proven that Eritrea can and will be an African power house. In the second game Eritrea showed that it is capable of scoring as they defeated the Sudanese side by the score of 5-0. The Redsea boys youth squad scored 9 goals alone against one team while the team played more games against Eritrean premier teams and scored 14 goals all in all. The games were against top teams including Midlawi Migbi (6-2) Adulis,(0-0) Al-Tahrir (defending Eritrean premier league Champions) where they played two games losing one (1-0) and tieing a second (2-2) and in their most exciting game they defeated Mai-Temenai (6-0). Sudan will face Rwanda in the under 17 African nations cup to be played at the end of August as well. Beijing Olympics and Eritrea This year Eritrea will be sending a number of athletes to the Beijing Olympics. The athletes slated to participate in the 29th Olympiad are 2004 Athens Olympic bronze medalist Zersenay Tadese, another former Olympian Yonas Kifle, Yared Asmerom, Tesfahannes Mesfin, Ali Abdela Afringi, Haile Wolday, former Olympian Nebyat Habtemariam, Simret Sultan, Teklemariam Medhin and Kidane Tadese. Cyclist Daniel Teklehaimanot, will also be representing Eritrea in the Beijing Olympics. 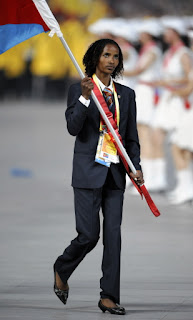 Simret Sultan pictured to the left is carrying Eritrean Flag in Beijing opening ceremony Most of the Eritrea's events in the Olympics will be happening towards the end of the event as Yared Asmerom will be competing in the Marathon where he has ran a time of 2:17:41 in Japan in the past. Yonas Kifle who was rumored to have left the Eritrean team will participate in the Marathon as well.

Zerisenay, Teklemariam, Kidane and Nebyat got to Beijing last Tuesday and were made to fly to a high altitude training area the next day. Reporting from the training area Dr. Tesfaslassie Eyob said that they are all in good condition. EAAA and Yohannes Debesai have confirmed that they spoke with all the runners and coaches. Their spirit is high and are making the highest preparation. In a report released by EAAA, here is what they had to say, The Eritrean runners are humble, a little bit shy and did not say much. Their message was " Ab Awet Yerakibena !". Coach Levingston and coach Abebe Zerihun are with the team that is about three hours flight away from Beijing and have confidence in the runners and the tactic they are going to use. Hais Wolday, who is going to take part in the 1500m race, has left the high altitude training for Beijing. Coach Levingston has accompanied Hais for the three hour flight to Beijing while coach Abebe stayed behaind with the rest of the team. Hais is running the 1500m second heat at 19:19 Beijing time On Friday the 15th of August( 07:19am Washington, DC time). Zerisenay, Teklemariam, Kidane and Nebyat are going to leave the training area and fly to Beijing after two days. Nebyat is running the marathon at 07:30 am on Sunday Beijing time ( Saturday 7:30pm DC time.) Zerisenay, Teklemariam and Kidane are running the 10000m on Sunday at 22:45 Beijing time ( 10:30am Washington, DC time) Rustom Fessehatsion, Journalist for the Olympic team, has said : " The runners are in a good mood. The Eritrean embassy in China and the Olympic team have coordinated the plans very well and things seem to be going well and at the moment we are just waiting for the events to take place." The Eritrean team seem to be well prepared and can outdo some of the the top countries in running when it comes to tactics. Please visit www.eaaarunners.org for information about the Olympic team performances. EAAA also invites all Eritreans in the DC metro are to come watch the big race of Zerisenay, Teklemariam and Kidane on Sunday at 10:30am in ECCC- AT 6th and L -Washington- DC. Please join us on Saturday at 7:30pm in cheering Nebyat in the women's marathon. EAAA believe that Eritrea will have good shot at the medal in the 10,000m by Zerisenay and in the marathon by Yonas Kifle or Yared Asmerom. The future great runners namely Teklemariam and Kidane are expected to perform well in the 10000 meters and dance with Zerisenay in the Beijing stadium. Zeresnay's support from the two runners should make a big difference in his performance. Good luck to Eritrea. 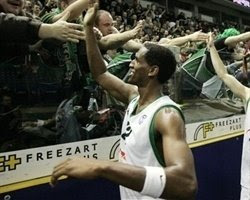 Thomas Kelati Update. (Picture above: Thomas giving high fives to his Polish fans) Thomas Kelati is currently playing in the summer league of the NBA where he can get a chance to prove himself after a couple of years in Europe. It is a very tough challenge but Thomas has a great ability to overcome. He is playing for the Los Angeles Lakers summer league team a slight change from his former team the Los Angeles Clippers. We will have an update on how he fared once we compile more information on Thomas. Meanwhile here is a nice You tube clip from his European team in Poland where he makes a foul shot and ends up winning the game on a BUZZER Beater. This video is definitley a must see. http://www.youtube.com/watch?v=nEV54iS38nM

Washington D.C Festival 2008 Basketball tournament was awesome. Year after year since the late nineties in Washington D.C during the annual festival a basketball tournament has been taking place and folks it is something to be proud of. Eritrean Basketball teams from throughout North America make their way with their own financial support as they come to participate in an intense basketball tournament. This year was not any different and folks I would like to give Kudos to a couple of people who have worked hard to keep this special event going on each year. With excellent preparations and also a few volunteers from each team, Tesfu Mezgebe, Diliet Sium and Fitsum Asefaw have been able to put together a basketball event that includes female teams, JV and adult male teams. Here below are three video clips put together by Haile Abraham who has been working on the growth of the basketball tournament since it's early days. http://www.youtube.com/watch?v=4_GIH51Fv7I

Teams from as far as Seattle, Toronto, Chicago, and many other parts of the U.S have come to participate and they should all be commended. This year while Team Chicago won the JV it was Team Maryland that played excellent ball to defeat DC in the finals. The two women's teams were also very competitive and more Eritrean young ladies and women should be encouraged to participate in all types of sports. For more on results and pictures just click on

http://www.eritreanevents.org/ click on the basketball link. We will keep you update with other sports news until then this is Eri-International sports blog. http://eri-internationalsports.blogspot.com/
Posted by Unknown at 8:27:00 PM

My Brothers and Sister all over the world, I am Mrs Boo Wheat from Canada ; i was in need of loan some month ago. i needed a loan to open my restaurant and bar, when one of my long time business partner introduce me to this good and trustful loan lender DR PURVA PIUS that help me out with a loan, and is interest rate is very low , thank God today. I am now a successful business woman, and I became useful. In the life of others, I now hold a restaurant and bar. And about 30 workers, thank GOD for my life I am leaving well today a happy father with three kids, thanks to you DR PURVA PIUS Now I can take care of my lovely family, i can now pay my bill. I am now the bread winner of my family. If you are look for a trustful and reliable loan leader. You can Email him via,mail (urgentloan22@gmail.com) Please tell him Mrs Boo Wheat from Canada introduce you to him. THANKS